11 Must-Read Books by Comedians That Deliver the Laughs 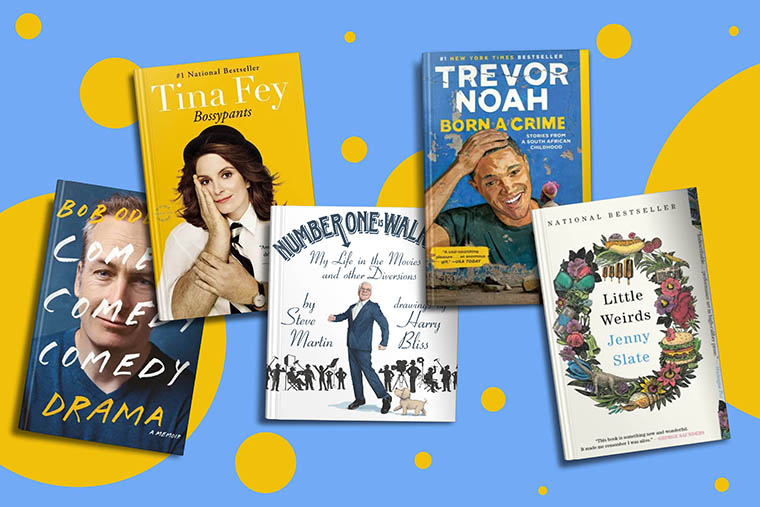 These hilarious narratives will leave you in stitches.

We gathered some of the best laugh-out-loud books, from new memoirs by Hollywood icons to hysterically good essay collections by whip-smart comedic minds. Not only will the books in this list crack you up, they also offer heartfelt reflections on family and fame and a fascinating glimpse at the grit, glitz, and glamor of making it in comedy. Number One Is Walking: My Life in the Movies and Other Diversions

In his brand-new illustrated memoir, comedy legend Steve Martin looks back on his dazzling career in Hollywood and invites us along for the ride. Illustrated by New Yorker cartoonist Harry Bliss and delivered in Martin’s delightful comedic style, Number One Is Walking is packed with hilarious behind-the-scenes adventures from the author’s illustrious film career, from the sets of films like Three Amigos and Father of the Bride to madcap exploits with the likes of Paul McCartney, Diane Keaton, and Robin Williams. Hailed by Publisher’s Weekly as “irresistibly charming,” Martin’s latest is a must-read for film fanatics and comedy lovers.

And when you’ve finished, be sure to check out A Wealth of Pigeons, Martin and Bliss’s bestselling cartoon collaboration from 2020 where Martin provides the captions for Bliss’s artwork. This beloved book will have you laughing right from its cover. In the bestselling Bossypants, writer, producer, and actress Tina Fey chronicles her extraordinary comedy career, revisiting her early years as a featured player in Chicago’s Second City, her breakout performances on Saturday Night Live; surviving the boys’ club SNL writers’ room; the trials and tribulations of motherhood; and what it’s really like to be the focus of a magazine photo shoot (not great!). If you’re a fan of 30 Rock’s sardonic digs at celebrity culture and the television industry, you’ll love Fey’s frank and funny memoir. Little Weirds is a little bit like Jenny Slate herself: whimsical, chaotic, candid, and silly all at once. If you’re familiar with Slate and her distinctive voice-acting performances on projects like Big Mouth and Marcel the Shell with Shoes On, then you’re sure to hear her warm and playful voice as you read through this lively bestseller. In it, the comedian delights in the joys of life while also working through real pain and trauma. Slate’s sincere and graceful delivery will likely inspire grins and giggles more than belly laughs, but you’re guaranteed to feel happier after reading her comedy book. In this hilarious follow-up to her New York Times bestseller Is Everyone Hanging Out Without Me? TV writer, producer, and actress Mindy Kaling draws on her relatable comedic stylings to crack wise on topics like body image, dating advice, romance, and pop culture. While the author’s first humor book mined self-deprecating comedy from moments of embarrassment and perceived inadequacy, Why Not Me? revels in Kaling’s confidence within the comedy world as she reflects on her career, Hollywood friendships, and her self-described “weird” relationship with best friend/ex-boyfriend B.J. Novak. In the award-winning Born a Crime, Trevor Noah flexes his storytelling chops and incisive political wit to recount his childhood growing up in apartheid South Africa. The Daily Show host knows how to balance biting humor with political critique and frank examinations of racism and corruption. Here, he relates heartbreaking stories of his youth through often hilarious prose, interweaving humor with human tragedy while crafting a moving portrait of his mother, who fought to give him the life of opportunity that he enjoys today. Bob Odenkirk has created one of the most compelling antiheroes in TV history with his portrayal of crooked lawyer Saul Goodman. Prior to putting on all those tacky suits in Breaking Bad and Better Call Saul, however, Odenkirk led a stellar career in comedy as a writer and performer in the alt-comedy scene of the 1990s and on HBO’s cult classic Mr. Show with Bob and David. In Comedy Comedy Comedy Drama, Odenkirk captures his wild ride through showbiz, tracing the highs, the lows, and his improbable reinvention into a Hollywood action star at age 50. This Is a Book

Comedy fans love Demetri Martin for his deadpan delivery and the way he draws graphs and illustrations during his on-stage performances. In This Is a Book, Martin channels those idiosyncratic instincts into a very funny narrative of charts, doodles, poems, and palindromes. Martin’s humor is rich with one-liners and wordplay: At first glance, it may appear to be little more than clever silliness; take a closer look, however, and you’ll find an original comedian who deconstructs artistic, cultural, and societal conventions while exploring the need for community and connection. Please Don’t Sit on My Bed in Your Outside Clothes

Phoebe Robinson applies her refreshingly honest comedic perspective to everything she does, from stand-up and podcasting to essay writing and television. In her newest essay collection, Robinson once again blends personal stories about her love life and career with sharp political and cultural critiques. “Funny, heartfelt, [and] joyful” (Kirkus Reviews, starred review), Please Don’t Sit on My Bed in Your Outside Clothes is Robinson at her best, adeptly navigating complex issues like the pandemic, anti-Blackness, and mental health in America with both wisdom and humor. Ali Wong frames her fun and touching comedy book as a series of letters written to her two young daughters. In the letters, Wong shares the insights she’s gained both on- and offstage throughout her comedic career, from succeeding in a male-dominated field to reconnecting with her Vietnamese roots. Brutally funny and unflinchingly feminist, Dear Girls serves up a heady mix of unbridled humor and frank reflections on motherhood and comedy stardom.

Sick in the Head: Conversations About Life and Comedy

This fascinating collection is a bit like multiple books by comedians rolled into one uproarious read — and it is a must for any comedy fan who wants to know what it’s like to sit with the comics at the back of the club. Penned by filmmaker Judd Apatow, Sick in the Head features a collection of interviews Apatow conducted with famous comedians. While ostensibly about joke-writing and comedy, the interviews often morph into deeper philosophical conversations about spirituality, creativity, and ambition. Of course, the interviews are also sidesplittingly funny. After all, how could an exchange with Sarah Silverman, Steve Martin, Chris Rock, or Mel Brooks not crack you up? Since he started doing stand-up in 1975, Jerry Seinfeld has worked through his comedic bits and ideas on a yellow legal pad and saved them in an accordion folder. In Is This Anything? the meticulous note-saver and comedy legend cracks open the vault, spreading out decades of jokes, riffs, and one-liners to reveal the evolution of his storied career. A treasure trove for comedy geeks, Is This Anything? is bursting with Seinfeld’s signature observational humor on the mundanities of modern life. It also offers a fascinating glimpse into the mind of a comedy icon.